The Top Herbal Supplements of 2019 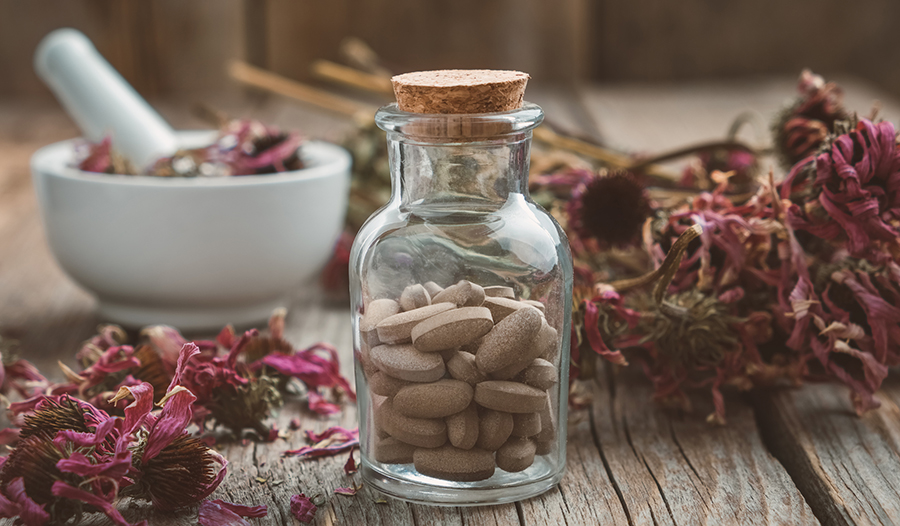 Humans have relied on herbs to help optimize health for centuries. These days it can be challenging to consume herbs in their native state and still ensure nutrient consistency. For this reason, many people have chosen herbal supplements to optimize health and treat targeted health conditions. Below we discuss the top herbal supplements of 2019 and the science behind their benefits.

Milk thistle (silybum marianum) is supplement commonly used by those wishing to optimize liver health. The herb, which has been used for over 2,000 years for health and can be traced back to the ancient Egyptians, consists of the extract silymarin and silybin, the main active ingredient of milk thistle fruit and seed.

Most recently, this herb has been popularly used by people for such conditions as hepatitis, fatty liver, cancer, and cirrhosis. It is also taken by those who consume alcohol regularly as a line of liver protection.

Suggested dose: As directed on the label. Available in capsules, as an extract, and in powder form.

Echinacea purpurea is a perennial herb that has been used for more than 1,500 years, with its origins being traced back to the indigenous people of North America. The plant traditionally grows east of the Rocky Mountains in the United States.

A 2015 study in JAMA showed that while there was no benefit in prevention, the use of echinacea could shorten the duration of the common cold. Conversely, a 2016 study published in Holistic Nurse Practitioner demonstrated echinacea could be effective in helping to prevent the cold virus. Other studies have shown similar findings.

A 2016 study in Pharmaceutical Biology showed that echinacea could be beneficial in reducing inflammation and also in helping to lower blood-glucose levels, a help for those with pre-diabetes and diabetes.

Suggested dose: It is frequently consumed as a tea but can also be taken in capsule form or as an extract. Echinacea 400 mg, once or twice per day.

Maca root is an adaptogenic herb cultivated in the Andes mountains of South America, primarily in the country of Peru. Grown at elevations of 13,000 to 16,000 feet (4-5 km) above sea level, maca root was used by the Inca for various medical purposes, but primarily as an aphrodisiac, to improve both libido and fertility.

A 2009 study in Andrologia showed that those who consumed maca root noted an improved sense of general and sexual wellbeing, while a 2016 study suggested that ingestion of maca root may help improve the motility of semen. However, it does not appear to alter testosterone or estrogen levels.

Perhaps related, the active ingredients in the maca root also have anti-fatigue properties, according to a 2017 study. A person with chronic-fatigue symptoms may benefit if they take maca root routinely. Other studies have shown that maca may also improve anxiety-related symptoms and menopause-related symptoms.

A different 2017 study using animal models concluded that maca root could be helpful in relieving arthritis-related pain and peripheral neuropathy, common in those with diabetes or poor circulation.

This tree leaf is one of the most studied herbs — since 2008, more than 2,000 scientific studies have been conducted. A potent antioxidant, ginkgo biloba is believed to have brain-boosting as well as circulation benefits.

Ginkgo is considered by some to be a “living fossil” and has been found in rock layers dating back 270 million years. Native to China, it is frequently taken by those with memory issues, including Alzheimer’s disease, and may improve mental sharpness.

A 2017 study in the Journal of Ethnopharmacology showed that gingko biloba, at a dose of 200 mg per day, could be beneficial for those with dementia. Further, a 2018 study demonstrated that ginkgo biloba helped protect the hippocampus (the part of the brain involved in both short-term and long-term memory formation) from oxidative damage.

Lastly, a 2015 study of over 2,500 patients showed that ginkgo could be beneficial for those with heart disease — specifically, angina pectoris.

Suggested dose: As directed on the label

Rhodiola (rhodiola rosea) is an adaptogen, an herb that helps protect cells and organs from oxidative damage. Adaptogens grow under harsh environmental conditions and must protect themselves against extreme weather, which gives them resilience.

Rhodiola has anti-inflammatory, antioxidant, cardiac, neurological, and mental health benefits, according to studies. Rhodiola has been discussed in more detail in a prior article.

A 2016 study showed that Rhodiola may have a possible improving effect on mood while also being beneficial in overall stress management.

The herb also has anti-fatigue effects and helps improve physical endurance, memory, and blood pressure. It may also help with anxiety and depression.

Berberine is extracted from barberry (berberis vulgaris) shrub, which contains plants that are both evergreen and deciduous. Found throughout Europe, North Africa, the Middle East, and Asia, the berries that are produced are a rich source of vitamin C.

Berberine is an active ingredient and can be consumed as an herbal food or supplement. It has been shown in scientific studies to have various health benefits and is commonly used in Traditional Chinese Medicine (TCM) and ayurvedic medicine, a healing tradition with roots in India.

Berberine can reportedly lower blood sugar and fight bacteria and viruses. It may even help with cancer prevention. It has also been used by ancient healers for its ability to treat infectious diarrhea. Further, berberine has antioxidant properties, which can help reduce inflammation and may be beneficial in preventing and treating cardiovascular disease.

Diabetes affects hundreds of millions of people around the world. A 2012 study showed that berberine could be helpful in reducing insulin sensitivity, which ultimately helps to lower glucose levels. It appears to work similarly to metformin, a popular diabetic drug.

Berberine has many additional potential benefits. A 2015 study in the Journal of Ethnopharmacology showed that berberine could be helpful in lowering blood sugar and total cholesterol levels. The study also found an elevation of HDL (good) cholesterol, which is associated with protection against heart attacks. Scientists have also shown that berberine can have benefits for gut microbiome by promoting the growth of healthy gut bacteria.

Suggested dose: 500 mg up to 3 times per day or as directed on the label.

The tabebuia tree originates from the Amazon region of South America. The name pau d’arco is Portuguese in origin and translates to “the tree that bows”. Used as a medicine among indigeous cultures, the tree blooms pinkish-purple flowers and can grow up to 125 feet. The wood of the tree was traditionally used to build bows. The active ingredients in pau d’arco are naphthoquinones, which are likely responsible for its health properties.

Pau d’arco could also be useful in fighting inflammation. A 2008 study in the Journal of Ethnopharmacology concluded that the herb could be particularly useful for treating inflammation seen with arthritis and atherosclerosis. Similarly, a subsequent study published in Molecular Medicine Reports in 2012 showed that pau d’arco had anti-inflammatory effects, reducing inflammation up to 50 percent.

Caution: Those on blood thinners should be cautious and consult with their physician before taking pau d’arco. Suggested dose: As directed on the label. Available in liquid, capsules or tablets. Also available as a tea.

Green tea (camellia sinensis) is the most common drink consumed in the world, second only to water. In addition, it is possibly one of the healthiest drinks one can imbibe. A search in Pubmed, a research database, shows that over 10,000 studies on green tea have been published over the last 10 years.

The tea’s origins can be traced back thousands of years to China. Today, green tea is the most widely produced type of tea in China, with more than 1.5 million tons grown each year.

Green tea is rich in antioxidants called polyphenols, specifically EGCG (epigallocatechin-3-gallate). Flavonoids, plant metabolites that are believed to boost health status, are also present in green tea, including quercetin. Other active ingredients include caffeine and L-theanine, considered a nootropic, these benefit the brain.

Green tea is believed to have numerous health benefits, from providing heart protection and blood-sugar control to improving brain health and cholesterol. It is also used by many for inflammation reduction, anti-cancer properties, weight loss, and general well-being.

The studies done show a wide range of benefits. A 2017 study in Phytomedicine, which reviewed 21 other scientific studies, concluded green tea helped reduce anxiety and improved working memory. A previous 2016 study showed that green tea could help improve the quality of life in those with inflammatory conditions. This occurs from the ECGC, which can suppress the gene/proteins responsible for inflammatory chemicals known as cytokines.

Also, a 2017 study in Medicine showed that men who consumed green tea (>7 cups per day) could reduce their risk of developing prostate cancer, the second most common cancer amongst men.

Green Tea can be consumed in capsule form and as a tea. Suggested dose: As directed on the label.

Elderberry (Sambucus sp.), a flowering plant, has been used for hundreds of years for medicinal purposes by native populations all over the world. With higher antioxidant levels, specifically polyphenols (which give them their deep color), than nutrient powerhouses like blueberries and cranberries, the popularity of the elderberry has caught on in recent years.

Within traditional medicine, elderberry has been used to treat joint- and arthritis-related pain. It has also been used by many to manage symptoms of upper-respiratory infections. Indigenous Americans are said to have used elderberries as treatments for various infections and fever. Likewise, in Europe, elderberry fruits were transformed into syrups for medicinal purposes.

A sizable range of studies on the elderberry have been conducted in recent years. Here are some findings:

Immune-System: A 2016 study showed that elderberry could reduce the duration of cold symptoms in airline travelers while a 2009 study in Phytochemistry showed that elderberry can perform similarly to the popular antiviral prescription medications oseltamivir (Tamiflu) and amantadine. It may also increase the strength of the immune system — studies from 2001 and 2002 both showed elderberry’s benefit in strengthening the immune system response.

Blood Pressure: A 2016 study in Pharmaceutical Biology showed that elderberries could be helpful in the management of high blood pressure,

Diabetes - A 2016 study using animals also showed elderberries could be helpful in the treatment of diabetes. A 2017 study demonstrated that elderberry has an antidiabetic effect and may be considered a “functional food” in the fight against diabetes.

Suggested dose: Elderberry is available as a tea, syrup, and lozenges for sore throats. Also available as gummies and capsules for general health use. 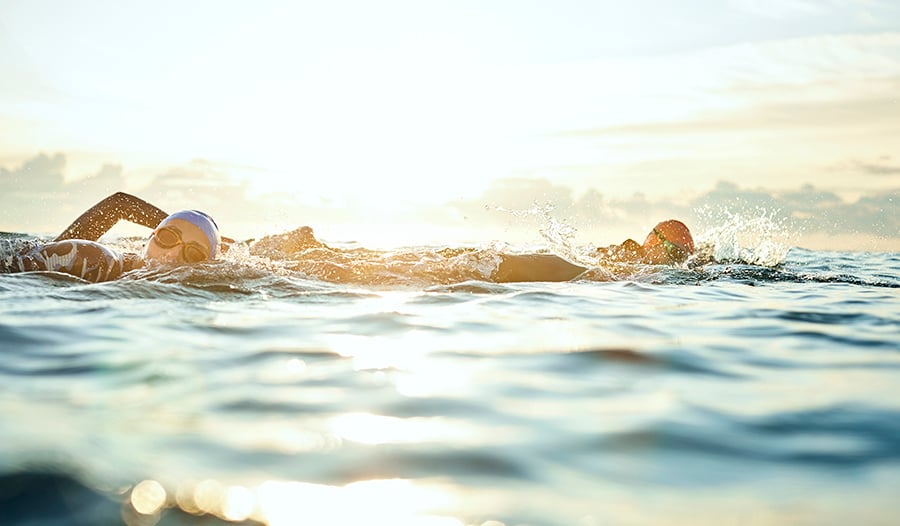 Supplements such as vitamin A, vitamin C, red ginseng, and cordyceps may help with supporting lung health. 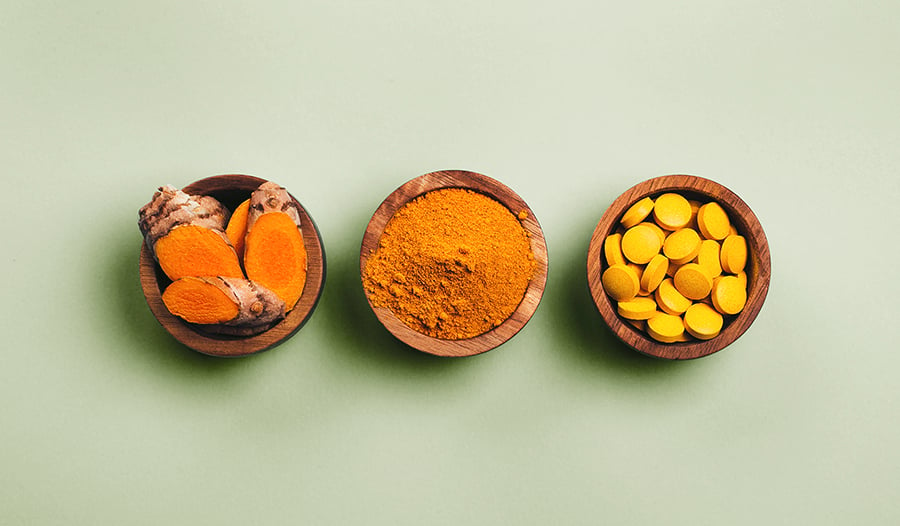 How to Use Turmeric — Benefits, Joint Health, and Dosage

Incorporating turmeric and curcumin supplements into your everyday routine is a great way to support healthy function and maintain joint health.

Minimize contact with harmful chemicals, especially in your home. A Naturopathic physician shares 3 tips for maintaining a clean home without toxic cleaners.