Your preference has been updated for this session. To permanently change your account setting, go to My Account
As a reminder, you can update you preferred country or language anytime in My Account

The Best 9 Supplements and Herbs for Managing Menopause Symptoms

This blog has not been approved by your local health department and is not intended to provide diagnosis, treatment, or medical advice. 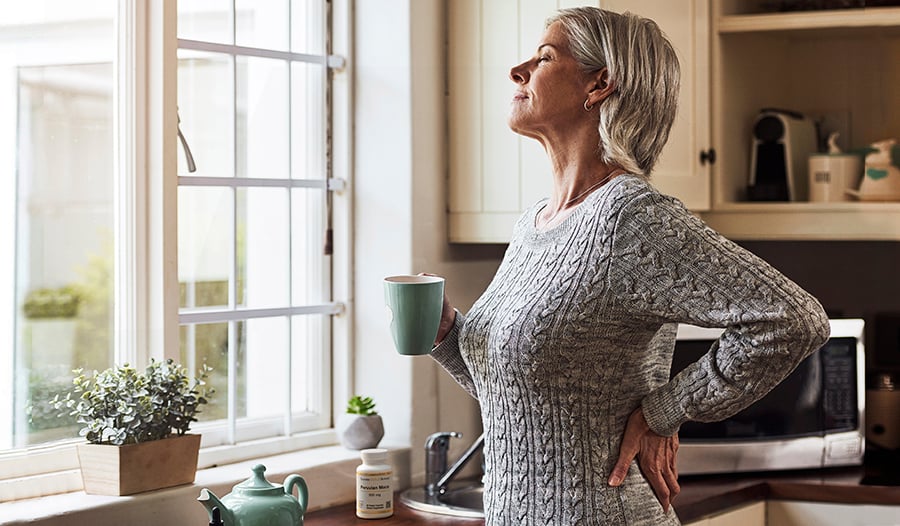 Menopause symptoms are estimated to affect up to 85% of women during this period of life and can drive you crazy and make you (and those around you) miserable. To compound matters, menopause often coincides with other midlife stressors like divorce, career change, empty nest syndrome, and caring for elderly parents.

You can’t prevent menopause. It’s a natural phase of life, one that can even be liberating.

There are supplements you can take and lifestyle changes you can make to manage and get relief from menopause symptoms, which are. Taking steps to support your body is empowering and will help you optimize your health and wellbeing as you age.

Many women dread menopause and even see it as a medical emergency, disorder, or disaster. But like puberty, it’s a normal, natural transition that happens as women age. The only exception is medical menopause, which occurs when the ovaries are surgically removed, as a result of some cancer treatments, and with certain autoimmune diseases.

Menopause is defined as both the natural ending of menstruation and the time during which the cessation occurs.

When Does Menopause Occur?

Also known as climacteric, menopause usually happens between the ages of 49 and 52. About 5 percent of women experience menopause in their early 40s, and 1 percent experience premature menopause before they hit 40.

Perimenopause, which literally means “around the menopause,” refers to the transitional time when menstrual cycles become irregular. You may experience long or heavy menstruation one month and skip a cycle the next. It’s often signaled by the physical symptoms associated with menopause and typically starts 4-10 years prior to menopause in your early to mid-40s.

Post-menopause is the term given to women who have gone a year without having any period. When you cease menstruating, you may still experience some symptoms associated with menopause due to hormonal changes, the aging process, or midlife stress.

The symptoms and physiological changes associated with menopause are triggered by changes in the body’s balance of sex hormones. The ovaries stop releasing eggs every month, and estrogen and progesterone levels start to fluctuate. High levels of estrogen can cause heavy bleeding and breast tenderness. Low levels can trigger hot flashes, night sweats, bone loss, headaches, and insomnia.

While hormone replacement therapy (HRT) has been the primary way to treat menopausal symptoms, it is associated with health risks, so many women cannot or choose not to use it.

It’s estimated that over half of women use complementary and alternative medicine to treat their symptoms, and 60 percent feel these alternative methods are an effective way to get relief. These practices include mind-body techniques (meditation, aromatherapy, and yoga), whole-body approaches (acupuncture, reflexology, and homeopathy), and supplements (vitamins, herbs, and minerals).

Here are some supplements that may help with menopause symptoms.

Melatonin is a hormone naturally made by the pineal gland that helps regulate sleep-wake cycles. Since insomnia is a common menopause symptom and melatonin declines with age, taking it may help improve sleep.

Decreasing levels of estrogen during perimenopause can have a negative impact on bone health. To protect your bones, it’s important to consume adequate amounts of certain vitamins and minerals, especially calcium and vitamin D.

The RDA for calcium is 1,000mg a day for women between 18 and 50. After age 50, the RDA increases to 1,200mg. You can get calcium from foods, supplements, or both. Calcium is found in dairy and soy products, fortified beverages, fish (with bones such as sardines), and green leafy vegetables.

Whether your calcium comes from food or supplements it’s important to get adequate vitamin D to support calcium absorption. Sunlight is the natural source of vitamin D, but many people don’t get enough, especially individuals with dark skin and those who live in the north. The US Institute of Medicine recommends an average daily intake of 400-800 IU, but some studies recommended higher levels of 1000-4000 IU, the safe upper limit.

Other important nutrients for bone health include vitamin C, vitamin K, potassium, and magnesium. To get adequate amounts, eat plenty of plant foods (especially fruits, vegetables, and beans). You may also want to take a good multivitamin for your age and gender to ensure you’re covering your nutritional bases. Research has also shown that taking 5g of collagen peptides daily may increase bone mineral density in post-menopausal women.

Exercise is another great way to increase bone density and muscle mass, which tends to decrease due to declining estrogen levels. To further support your muscle mass, make sure to eat enough protein. The RDA for protein for women over 50 is higher than it is for younger women: 1 to 1.5 grams per kilogram of weight (1 kilogram = 2.2. pounds). Aim to consume 20-25 grams at each meal.

Women have been using traditional herbal remedies to manage menopause and symptoms for centuries and treat everything from depression, anxiety, and insomnia to PMS. Some of the most popular herbs to promote sleep and reduce anxiety include valerian, lavender, passionflower, and chamomile.

Herbs and other plants work with the body to promote healing and can be gentler than pharmaceuticals. They can be taken as pills, tinctures, or teas. Some can be incorporated into foods like smoothies, soups, and stews. It’s important to note that herbal medicine can be powerful so it’s a good idea to talk with your physician about what you are taking. Many doctors also incorporate complementary and integrative care into their practices.

Here are some other herbs that may be effective for managing menopause symptoms.

One of the most popular and widely studied herbs for treating menopause is black cohosh. First used by Native Americans and also known as “bugbane” because it was utilized as an insect repellent, the plant’s roots are harvested in the fall and used either fresh or dried for medicinal purposes. The plant contains chemicals that affect the immune and nervous systems and may also help modulate estrogen.

While more research is needed, a randomized clinical trial comparing black cohosh extract combined with St. John’s wort (more on that below) to a placebo found that scores on the Menopause Rating Scale were cut in half in the treatment group compared to a 19% reduction in the placebo group. Compared to the placebo group, depression also significantly improved in the treatment group.

St. John’s wort is a wild plant that has been used for centuries to boost mental health. In Europe, it is prescribed for depression and is also sold as a dietary supplement.

Research looking at the effect of 12-weeks of taking St. John’s wort three times a day found that the herbal remedy substantially improved both psychological and psychosomatic symptoms in women complaining of menopausal symptoms. Another study found that compared to controls, women treated with St. John’s wort had significantly better menopause-specific quality of life and fewer sleep issues. A decrease in hot flashes was also observed in the women taking St. John’s wort.

Known as a natural alternative to estrogen therapy for menopause symptoms, wild yam is a tuber that has been used in traditional Chinese medicine to treat symptoms associated with menopause for centuries. Often incorporated into creams, it contains a chemical called diosgenin that in a laboratory can be turned into various steroids including estrogen. While the body does not appear to convert wild yam into estrogen, the plant may contain other chemicals that have an estrogen-like effect.

While more research is needed to demonstrate its effectiveness, a randomized clinical trial of 50 women who took 12mg of purple yam twice a day reported significant improvements in menopausal symptoms (mostly psychological) as compared to controls.

A key ingredient in Chinese herbal medicine and member of the carrot and celery family, dong quai is frequently used to enhance the immune system and reduce inflammation. It’s often referred to as “female ginseng.” It is used as a remedy to balance women’s hormonal system and treatment for both menstrual cramps and menopause.

Research on dong quai’s impact on menopausal symptoms has been mixed, with some studies finding a benefit and others finding no significant improvement. A 3-month randomized controlled trial comparing Dong quai combined with chamomile to a placebo found that 90-96 percent of women taking the remedy reported clinically significant improvements in the frequency and intensity of hot flashes.

A 12-week, randomized clinical trial found that women who took dong quai combined with black cohosh, milk thistle, red clover, American ginseng, and chaste berry had a significant reduction in hot flashes and night sweats. More research is needed to determine if dong quai has benefits on its own. It’s important to note that dong quai has safety precautions and can interact with both drugs and other herbs.

Native to the Andes Mountains in Peru, maca is a cruciferous vegetable and member of the mustard family. The root is used in traditional medicine to increase fertility and libido. Commonly used in cooking in Peru, it has a deep, earthy flavor. High in vitamin C, copper, and iron, it can also be taken as a supplement and comes in a powder, which can be added to smoothies and other dishes.

A review of randomized clinical trials comparing maca versus a placebo for treating menopausal symptoms provided favorable but limited evidence for its effectiveness. Animal studies have shown that supplementing with maca potentially could prevent post-menopausal bone loss.

Phytoestrogens are plant compounds that may balance estrogen levels. They are found in several plants including soy, red clover, flaxseed, and hops. In Japan, where soy foods are a dietary staple, women report significantly fewer menopausal symptoms. A review of over 500 studies concluded that “Phytoestrogens appear to reduce the frequency of hot flushes in menopausal women, without serious side-effects.”

It’s important to understand that each woman experiences menopause differently. Some sail through it while others struggle. Whatever you are experiencing, be easy and gentle with yourself, and double down on the self-care.

Finally, take the advice of Dr. Christiane Northrup who says in her book The Wisdom of Menopause: “Menopause is an exciting developmental stage—one that, when participated in consciously, holds enormous promise for transforming and healing our bodies, minds, and spirits at the deepest levels.”

This article was written by Ellen Albertson, PhD, RDN, NBC-HWC, a psychologist, nutritionist and board-certified health and wellness coach. She empowers women to get unstuck and find the energy, confidence and clarity to make their next chapter their best chapter.

Previous Article
Do You Have Heat Exhaustion? Here’s How To Tell and What To Do To Recover
Next Article
Ashwagandha Gummies Are Trending—Here Are 4 Powerful Benefits

42,441 Views
Hot flashes are a sudden feeling of feverish heat and generally connected to menopause.

These Herbs, Spices and Nuts Could Help with Diabetes Management

39,330 Views
Worldwide, more than 422 million people have diabetes. The vast majority—90-95 percent— have type 2 diabetes, a condition primarily due to lifestyle factors, like consumption of excess sugar, and limited physical activity.

This blog has not been approved by your local health department and is not intended to provide diagnosis, treatment, or medical advice. The content provided on this blog is for informational purposes only. Please consult with a physician or other healthcare professional regarding any medical or health-related diagnosis or treatment options. Information on this blog should not be considered as a substitute for advice from a healthcare professional. The claims made about specific products throughout this blog are not approved to diagnose, treat, cure, or prevent disease.